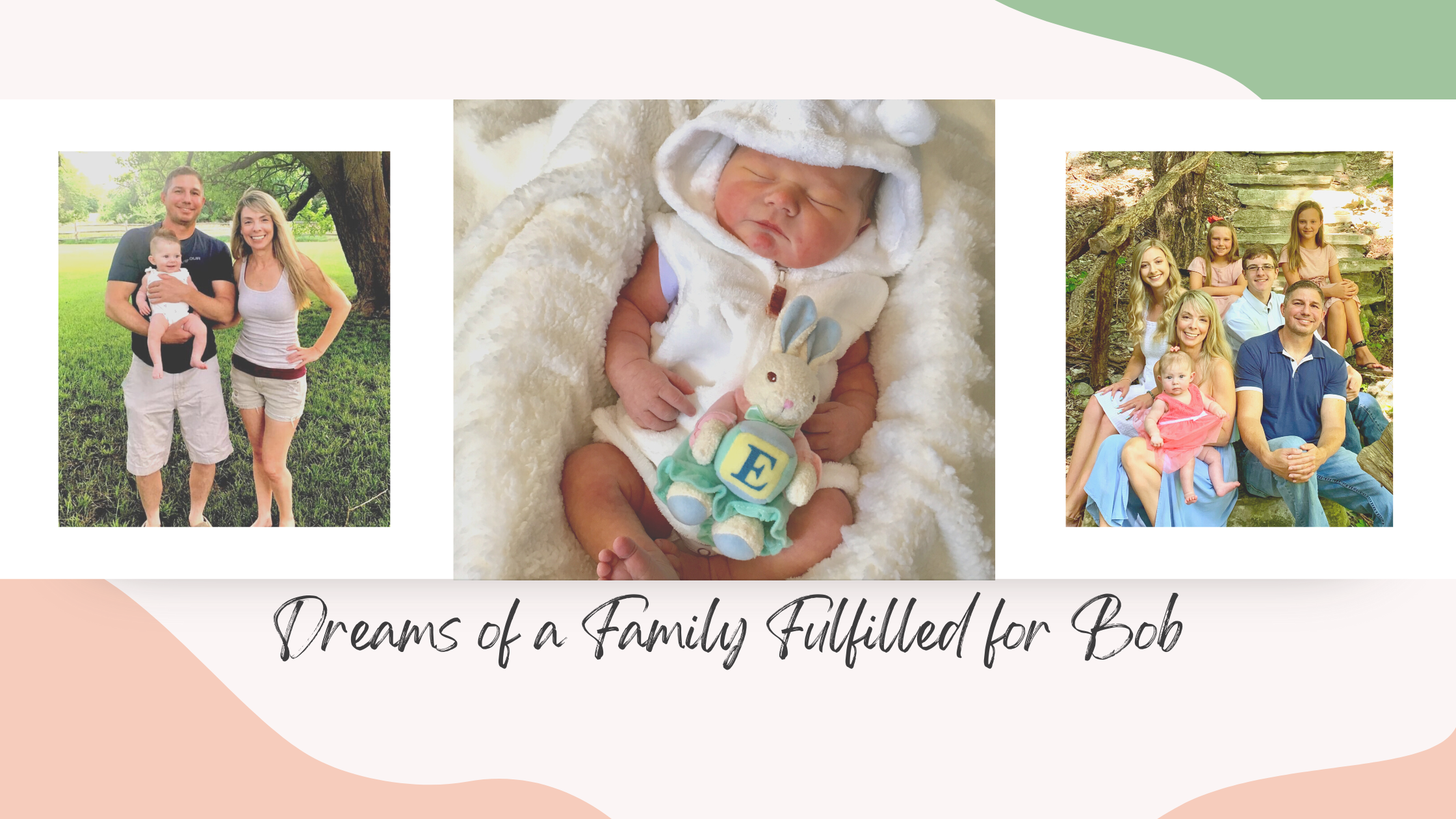 Bob dreamed of becoming a father, but he was not sure if that would be possible. A single man is not what many people picture when they think of “family.”  But becoming a parent was the most important thing in his life right now, and he was willing to travel the distance on his own. Surrogacy was both an anxiety-provoking and rewarding experience for Bob. His journey was not only nerve-wracking because of being single, but he also traveled through this journey during a pandemic, making it nerve-wracking to not know what would happen and on what level. Little did he know, it would soon become the best decision of his life!

Funny enough, during Bob’s journey, he met Tina, his future wife-to-be. This came as an unexpected but welcome curveball in his life.  When the two met Tina already had four children, including two adopted siblings. Her understanding of unconditional love extended beyond just birthing a child. However, she felt she had already completed her family when she met Bob and feared she could not offer a child to him. Upon learning of the surrogacy process he had recently started, both realized that their fears were completely unfounded, and everything was falling into place.

Bob’s first egg donor did not work out, and he was told that he might have trouble finding a carrier match since he is single. Quite by chance he matched very quickly with Crystal, who was enthusiastic about helping him have the child of his dreams. Even better, the first transfer worked, and a pregnancy began shortly thereafter. This was all extremely exciting, but there was always a sense of anxiety that something unforeseen would happen. A pandemic and the usual worry of having someone else carry your child only exacerbated this. Yet, Crystal kept Bob and Tina updated diligently, and their ability to attend ultrasounds was a significant help.

Bob’s daughter, Elsie’s birth was such a beautiful experience. Bob has had many experiences, but he says, “this was the best.” Tina said the feeling that she felt when Bob first held his daughter was indescribable, especially knowing the journey he took to have that very moment. She said there was something magical about this birth and seeing it through Bob’s lens.” It was astounding to see the welcome home from our families, who had been so supportive all along; her older siblings were especially overjoyed.”

In looking back at this rollercoaster journey, Bob recalls how the fertility doctor and clinic, as well as the support from the Surrogate Solutions staff, provided an almost bedrock source of positive thinking. He recalls the doctor saying that if it did not work the first time, it would likely work the second time. Surrogacy had initially seemed like a pipedream to him, reserved only for wealthy individuals. As Bob and Tina have realized, there is a reasonable chance of success if you just put a bit of faith into it; even though success is never guaranteed, they believe surrogacy is a very viable option for everyday folks looking for the opportunity to be a parent or parents.

Bob’s biggest piece of advice is to follow your dreams but recognize that it might not work, despite putting in a good deal of effort and money.

But as Bob says, he would rather have tried and failed then spend the rest of his life wondering if it would have ever worked. Bob and Tina are both so grateful this journey was available to them and cannot imagine life without their beautiful 8-month-old baby girl, that resulted from “following that dream.”

Advice to intended parents for matching timely is to share your story with our Surrogacy Program Director & Social Media Team, as it will help in finding the right match in a timely manner. We look forward to serving you and helping you create your happy family.

Learn More, Surrogacy Costs, Why to use an agency,  How we are different,

Finding the right carrier, Getting Started