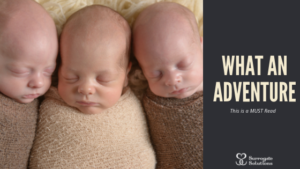 Keli and her family helped create two families through surrogacy. She learned about surrogacy from a friend who was a surrogate with Surrogate Solutions. Keli and her husband had completed their family and knew it was the right time to help another family create theirs.

Keli’s first journey was just about four years ago. She worked with an amazing couple who now resides in the Australia, but they were in the UK during their journey. The journey started a little rocky, as it took five transfers for a successful pregnancy, but once they were pregnant the journey went very smoothly.  During the surrogacy, both families became close friends and they grew extra close after the delivery due to the new family staying stateside for a few months.  To this day, the two families remain close. In fact, Keli & her family will be visiting them in the this year in Australia.

Keli just completed her second journey about four months ago, and this one would make a fantastic movie! Keli, her medical team, and her intended parents decided to transfer two embryos and they were so successful that Keli actually got pregnant with TRIPLETS! Keli had a pretty smooth pregnancy up until the time her water broke. She and her husband were at a pool party when she told her husband about her water breaking and he drove her to the hospital in his swimming shorts and no shoes.

With her water breaking, Keli was admitted into the hospital an hour away from her home. The next few days were uneventful until she started having contractions. Her mom came  to the hospital that evening, and Keli is so thankful she did.  Keli actually gave birth to one of the babies while in the restroom! She caught the baby herself & then was headed to the OR for a c-section. Since it was so late, neither her husband nor the baby’s parents got the message until the following day.

The following day the parents got to hold their sweet babies and Keli got to see her sweet family as well.  Keli loved being pregnant and she is so happy she was able to help create two families.  She did a fantastic job & and we are thrilled that she chose Surrogate Solutions to complete this journey with her.