Stories of loss among intended parents (IPs) are all too common. We know most IPs have already spent years trying to conceive before they arrive at Surrogate Solutions to help them build their families. Madison’s journey to parenthood was especially difficult with four rounds of IVF, two miscarriages (herself and a surrogate) and multiple embryo transfers that didn’t work. She and her husband, Matt, also experienced the devastating loss of their son, who was born prematurely at 26 weeks.

The question that comes to mind is how do you find the strength to move forward when faced with so much loss? “We knew we wanted a family and the only way to achieve it was to keep going,” Madison says. “The desire to start a family gave us that strength and drive. As hard as everything was, we knew that if we didn’t move forward – not move on – our dream of having a family wouldn’t happen. We didn’t want to stay in the dark place we were in after our loss.”

Madison’s story is one of resilience and courage to never give up on the dream of a family. If you are an IP considering surrogacy to grow your family, we hope you will find inspiration and hope through her story.

The first surrogacy journey
After several years of trying to conceive with the help of two different physicians, surrogacy was recommended as the best option for Madison and Matt. Madison did extensive research and interviewed three agencies before choosing Surrogate Solutions.

“I had a great conversation with Gayle, who helped me understand everything Surrogate Solutions could offer me [as an IP],” she says. “I liked that everyone at the agency is connected to infertility in some way, which meant they could understand our side of it. I felt like everyone was down to earth and relatable.”

Madison and Matt, who live in Houston, were able to match quickly with a gestational carrier (GC) in Dallas. Proximity was important because they wanted to attend medical appointments with their GC and be involved with the pregnancy as much as possible. Their surrogate stayed with them before the transfer, and Madison took her to the appointment. The first transfer was a success, and Madison and Matt were excited to be expecting their son.

Madison shares the mixed emotions that can arise for IPs who are expecting a child through surrogacy. “It’s hard as an IP because you are living away from the process,” she explains. “You want so badly to be pregnant, and you’re happy, but it’s hard because the baby isn’t in you.”

The GC’s pregnancy went smoothly at first. Madison and Matt attended the milestone 20-week anatomy scan, and everything checked out well. Two weeks later, they received a call from their surrogate who said she was bleeding and planned to go to the emergency room. Madison tried to remain calm knowing that it’s not uncommon for women to experience some bleeding during pregnancy. However, the next call they received was to notify them that the surrogate’s water had broken.

“Everything stopped in our world; we thought the baby was coming,” Madison says. “We drove to the hospital in Dallas, and the doctors came in to talk with us. They basically said it was over, and the baby wouldn’t survive. They gave us the option to induce or wait for the baby to come.”

After discussing it with their surrogate, they made the decision to wait because the baby was not viable yet. “The thought of having our surrogate induced wasn’t an option if he planned on staying in her belly,” Madison says. Their surrogate spent two weeks at home on bedrest, then transferred to the hospital at 24 weeks to stay on bedrest through the remainder of the pregnancy.

Their son was born at 26 weeks, weighing just two and half pounds, and there were severe complications due to a lack of amniotic fluid.

“The doctors had to do a lot to get him breathing,” Madison says. “Then they did a brain scan and discovered a Grade 4 brain bleed – the worst kind.”

Their son lived for two days before Madison and Matt decided to withdraw life support.

“We didn’t want him to not have a good life,” Madison says. “We felt like it wouldn’t be fair to him or to us to keep him on life support. We had him taken off the machines and held him until he took his last breath.”

Deciding to try again
After returning home, Madison and Matt took some time for themselves to grieve and mourn the loss of their son before deciding to move forward with another surrogacy journey.

“We knew in our hearts we were hurting, but we wanted to move forward with having a family because we knew the process could take a long time,” she explains. “We met with a psychologist to make sure we were ready to move forward.”

They were matched with a second surrogate, who lived just 45 minutes away. “She seemed very laid-back, and I needed that,” Madison says of their first meeting with the GC and her husband. “They seemed like they really wanted to help a family, and we definitely needed some help. We also liked that they were so close because we felt it would be easier to continue the relationship afterwards.”

It took three transfers, but they were able to achieve a positive pregnancy with their surrogate. Madison recalls the experience of going to the doctor appointments with her GC the second time around. “Every week was a huge milestone,” she says. “We never felt completely comfortable because of everything we had been through previously.” 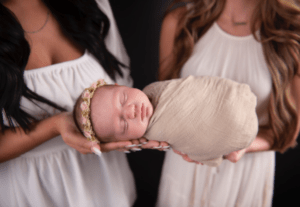 The birth of their daughter

Madison and Matt’s second journey was not without complication. Shortly after their baby shower in August, their GC contracted COVID-19 and wasn’t feeling the baby move. Their daughter, Harlow, was delivered six weeks early via an emergency C-section.

“It felt like another nightmare,” Madison says. “Harlow had to be quarantined for 48 hours to make sure she didn’t have the virus, so we weren’t able to see her right away. We also couldn’t see our surrogate because she had COVID. You could say our birth plan did not go as planned. Again, we felt like we were living away from the process. We were thankful for FaceTime.”

After 10 days in the NICU, they were finally able to take their daughter home. Now three-months-old, Harlow is a happy, healthy baby. The bond between Madison and her daughter is evident during the interview as Harlow keeps a watchful eye on her mom and refuses to be put down.

“We’re overwhelmed with love and joy, but at the same time, it still seems unreal that we have child,” Madison says. “I think as we take her out more and do more things, it will feel more real, but right now, it still feels like a dream.”

Never giving up
Madison’s journey has included more heartache than most people could ever imagine going through themselves, yet she continued to persevere, never losing sight of her dream to become a mother.

“If a family is your goal, then don’t give up; keep going through the process,” she advises. “I know it’s a roller coaster of ups and downs, but are you ready to give up on your dream?”

She adds, “I will never forget when our son was born at 26 weeks. We were so thankful he survived. The two days we had with him were a gift. The smell of the NICU and the nurse telling us, ‘Now you’re on the NICU roller coaster.’ I will never forget it. We could have never imagined the outcome of our sweet boy, but we kept moving forward.

Our journey wasn’t easy, but we kept going because we knew how much we wanted a family.”

with the help of caring Egg Donors & Surrogates.